Founder of Boonie Babies Saipan, Aria Keilbach, moved to the island of Saipan in 2018 from Pueblo, Colorado. Having grown up with a passion for animals, the harsh treatment of boonie dogs on-island could not go ignored by Aria. Only 16 years old at the time, she started by simply stocking her car with dog food to stop and feed any strays she came across. Urgent situations then thrust her into the world of rescue, fostering, and providing medical in-home care as she took in some of the worst situations of neglect she had ever seen. Aria was able to rescue, foster, and adopt out several dogs at a time but Boonie Babies was able to transform into an even greater mission when her sister, Grace Keilbach joined her on Saipan in 2020. As a team, the Keilbach sisters are now able to rescue more dogs than ever before and make their presence known on social media to bring awareness and help to the boonie dogs of Saipan.

it's better than nothing at all. 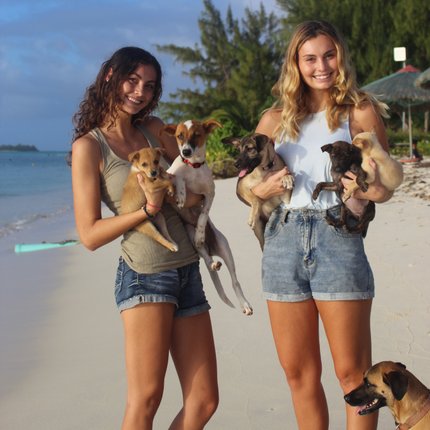 The 19 and 21 year-old sisters work full time to provide care to the boonie dogs of Saipan while also attending college courses. You can reach them through the social medias provided:

These photos display just a fraction of the abuse and neglect the boonie dogs of Saipan face everyday.

Abandoned in the jungle with 5 puppies.
Frankie is now thriving with her new adoptive family.

Siblings on our feeding rounds who fought tick disease. Billie and Ginny are now thriving in their forever homes.

Thrown out of a car as a puppy Stevie is recovering from tick disease, blindness, and a damaged jaw.

Hit by a car by "owners" and left with untreated injuries.

Chained to a cement slab and starved along with 3 puppies. The once 29lbs. boonie is now 65lbs. and loving her new home!

Thrown in a trashcan. Pele is still waiting to be adopted!

Tied in a plastic bag and left on the side of the road. Safe, happy, and adopted now!

A current Boonie Babies foster awaiting a flight off-island to her forever home. Honey is fighting off heartworms.

A pack of dogs on our feeding rounds

A stray boonie thankful for a Boonie Babies provided meal.

Left at a popular trash dumping site with her siblings. They are all now happy and healthy.

Terrified stray puppies who overcame severe mange and emaciation. They have since been adopted!